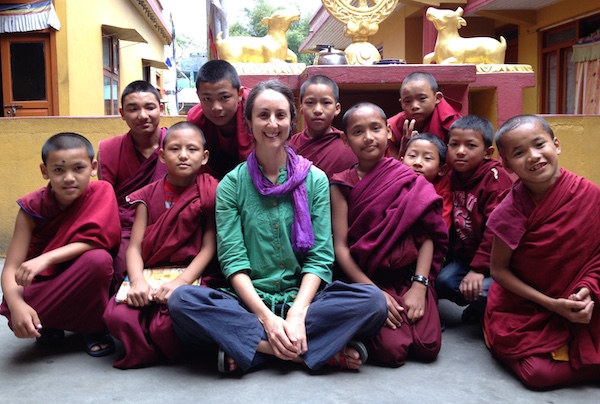 I hadn’t planned on adopting a class of Tibetan boy monks whilst in Nepal. I was walking down a street in the centre of the lakeside town of Pokhara with a belly full of dal bhat, when I spotted a sign to a Tibetan refugee settlement and felt compelled to follow it…past two hairy goats and a couple of old men smoking pipes. I came to the gates of a Buddhist temple and got chatting with a teenager wearing maroon robes. He told me his name was Tenzin. I told him I wanted to help the Tibetan people and asked if he knew of any places where I could volunteer.

“What kind of helping could you do?” he enquired.
“Um, I suppose I could teach English or something,” I replied. He told me to sit inside the temple gates and wait for him to return. Ten minutes later he popped his head around the corner: “Angie, please come”. He led me up two flights of stairs to a dark room in the corner of the building. It had a tiny window without glass and a rug on the floor where, it was clear, many grubby feet had trodden. I tried to avoid the grains of cooked rice that were stuck in the strands of carpet as I sat myself down.

Tenzin smiled as he told me about his home back in Mustang and how his 70-year-old mother now lives in a hut in the mountains alone and feels the cold most of the year. After the chat had finished he said: “Not much longer, maybe another five minutes, and then your students will arrive”.
“What students?” I asked, completely surprised.
“Boy monks. You will now be their English teacher,” he declared.

Minutes later a thin boy with a shaven head appeared in the dark doorway, “Namaste,” he beamed at me. Then another boy arrived, and another, until I had ten smiling faces sitting on the sticky rug before me in the fading afternoon light.

“This is Angie from Australia. She is your new English teacher,” Tenzin said to the boys.

The next hour was spent cross-legged in front of a grotty white board, with boy monks so keen to spell the words ‘dog’, ‘horse’, ‘pig’ and ‘chicken’ that they shuffled closer and closer to me until I could feel their breath on my body as they shouted the letters enthusiastically into the air.

“And tomorrow, you come same time?” Tenzin said as I wrapped up the farm animal lesson. With ten eager faces looking intensely at me for an answer, I said “Sure”.

And just like that – I’d become a teacher of boy monks at a Tibetan refugee settlement in Nepal.

The next day, after spending an hour preparing my morning lesson, my cell phone rang. It was Tenzin: “Today, we don’t need a teacher. Please come on Monday”. Two days later my phone rang: “Actually, my boss monk says no women are allowed in the temple. I am sincerely sorry. Thank you for your kindness, Angie. Please come to Mustang with me some day”.

And just like that, I was no longer a teacher of boy monks at a Tibetan refugee settlement in Nepal.

I usually make big plans for myself when I travel. I have things on my ‘to do’ list. Places to see. People to connect with. I map out my itinerary. I spend hours on Trip Advisor reading reviews about restaurants that I may or may not ever dine in (I have been known to use luminous yellow highlighters on printed pages of Lonely Planet guides). To be honest, it’s not just when I travel. I’ve spent most of my adult life creating daily, monthly, yearly schedules for myself. I’m a person who likes to control ‘what tomorrow will bring’. So it was completely out of character for me to fly to Nepal for three months without a plan. But the voice of God/ Lord Buddha/ my Higher Self commanded me to go forth.

What became clear to me, within a few weeks, was that once I let go of my fear of ‘the unknown’ and actually embraced uncertainty – fun things started to happen. Because the beauty of having no plans is that you can say ‘yes’ to almost anything….

Like going to Chitwan to buy a cow…
Like riding on the back of a motorbike to meet a secret shaman in the hills…
Like jamming with a gypsy jazz man from Paris in a bar in Pokhara…
Like teaching Tibetan boy monks how to spell ‘chicken’….

After saying ‘yes’ often the plan would fall through: “Angie, my uncle is now coming with me to buy the cow and if you come too he might tell my family that I brought a white woman with me and that would cause suspicion so today we will not go shopping for a cow together”.

Or sometimes it would morph into a completely different plan: “Angie, the concert where you were going to sing tonight is cancelled so I will take you to a rich man’s wedding instead and you can dance with many friendly Nepali people”.

Last week I lost my regular source of income. Soon, the seaside apartment I’ve called home will no longer have my name on the lease. The ankle injury that I’d hoped would be almost healed continues to cause me problems and pain. Things that I’d counted on for stability in my life have now come undone. My three months of living without a plan has blown out to six months and there seems no end in sight to the uncertainty…and that scares me.

But when I feel the fear rising, I remind myself that a life-unplanned means that tomorrow can bring me whatever tomorrow wants to bring…I’m free to say ‘yes’ to almost anything, right? So if you need a hand to go cow shopping, give me a call.

“The foolish cling to what they have
And fear change
Their lives are going nowhere.

The clever learn to accept uncertainty
And ride through change
Capable of starting anew anywhere.

The wise realise the value of uncertainty
Accepting all changes without changing
For them, having is the same as not having” - Chai Na Pol A
Labels: Earthquake Nepal Pokhara Tibet Tibetan Refugee Settlement